The Spring Classic at the Driveway

The alarm started screaming at 6:30.  Confused, I reached over and hit the snooze; it only felt like 5:30 and my body wanted more sleep.  I dozed, but the alarm came again.  The dripping of rain off the eaves and the chill draft blowing through the open window were convincing arguments for staying in bed with Emily.  We discussed the possibility, but both knew it wasn’t a realistic option.  The Spring Classic wasn’t going to set up itself, and I wasn’t going to leave Andrew and Holly hanging on such a beautiful Belgian day.  She tried her hardest to keep me in bed, but I got the upper hand by using the vicious steamroller technique, which threw us both into fits of giggles long enough for me to escape to the kitchen to put on water for coffee.  An hour later, with a belly full of breakfast, I threw on a jacket and a ridiculous yellow poncho and made my way into the elements.

In spite of the soaking rain, finding myself back at the Driveway with Holland Racing was like seeing a close friend after being gone for years.  It started to sink in for me exactly what Sunday’s race and time change represents for the Austin racing community: a return of the weekly camaraderie that comes with racing 85 of the same guys on a weekly basis.  I’m certain that I speak for other people in the community; the most important thing about le Driveway is the ability for it to forge relationships out of an environment of adversity.  Whether the bond is strengthened between a husband and wife that choose to share a hobby, between a more experienced racer and somebody searching for a mentor, or even just between a group of friend that like to share a beer on the porch after a hard night of racing; the result is a more cohesive community that builds strength and helps us all become healthier, more balanced individuals.  Plus, the racing is intense. 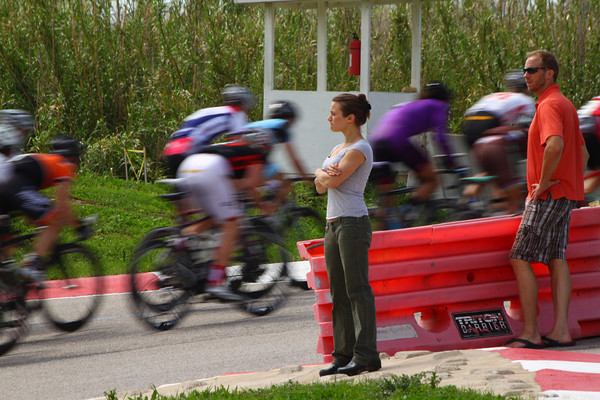 Look no further than the first race of the day for both the camaraderie and the intensity of racing at the Driveway.  As the rain continued to fall at 9am, the cat 4’s took the line and started their race, and it was immediately obvious how the race was going to play out.  Comanche Racing, having strength in numbers, took responsibility for making the race and immediately sent a courageous warrior off the front of the field in a bid for solo victory while the rest of the team covered bridge attempts and kept tabs on the other strong guys in the field.  As somebody that enjoys being in long, painful breakaways, it broke my heart when Jordan Parker got caught not long before the finish, but it was exciting to see his teammate Devin Parker in perfect position to capitalize on the work that the field had done to bring Jordan back.  Devin, who has the most awesome euro-inspired hair style in all of non-Europe, waited in ambush and dominantly took the sprint and the win; in the rain, like a Belgian.  Chapeau Devin, and chapeau Comanche for racing selflessly as a team. 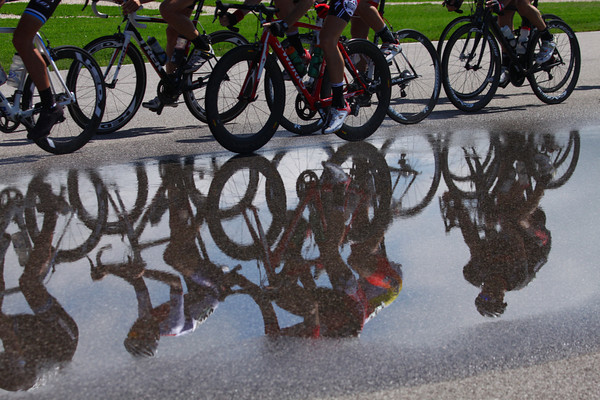 As the day progressed and the weather got less intense while the racing action did quite the opposite.  By noon, the 50 degree rain was thankfully replaced by 80 degrees of beautiful sun, giving us a respite from the wet chill while going to work drying out the race surface. The P/1/2/3 race was gearing up to be a 90-minute, first-class spectacle of high-speed tanning.  And it delivered.  Ninety-five racers started what would be a relentlessly fast race along the entire length of the Driveway’s Grand Prix course.  Our field averaged 28.0 miles per hour and covered 42 miles over the hour and a half.  John, Mike and I represented for Team Wooly Mammoth.  Our goal was simple; surf the front of the peloton and be present in moves as they went. 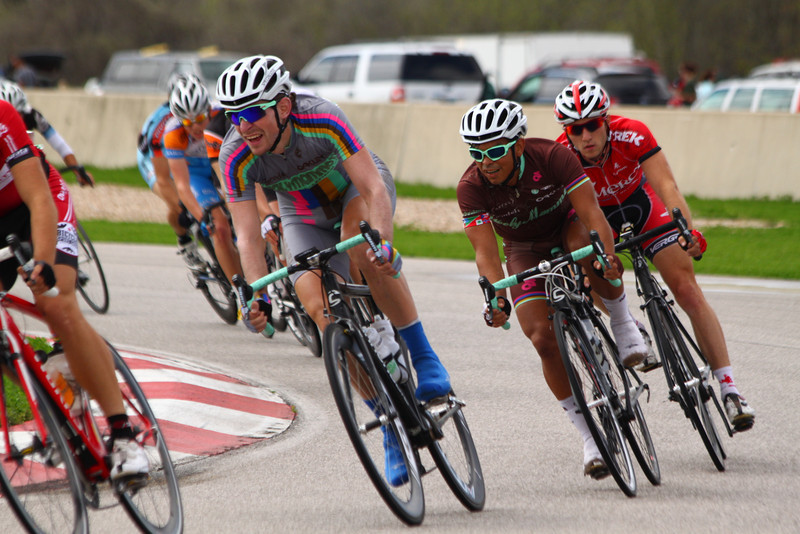 The most exciting and satisfying part of the race on Sunday was getting a chance to click with a teammate while working together.  With both of us near the front of the race for the majority of the 90 minutes, John and I were in position to contend for most of the day’s primes, and  we took advantage of the opportunity by working on the age-old romantic tradition of cycling; the lead-out.  Generally, while employing a lead-out riders on a team will up the pace to string out the peloton, at the same time giving shelter to the team’s sprinter, who is strategically placed to take advantage of the faster pace in the lead-in to a sprint.  An effective lead-out requires coordination and timing, which take a tremendous amount of practice to get right.  I’d like to be able to say that John and I were insanely successful and took home sack-fulls of loot, but the reality is our timing was off during both attempts, although the second was better than the first.  And despite the troubles with timing, the important part is we were both there to make an attempt, and we were on the same page: as I looked back over my hip to locate John, he knew exactly what I was thinking and was willing to put in the effort to make it work.  We were thinking as one with very little communication.  While the energy put into those efforts could have been spent better at the end of the race, the investment now to iron out the kinks in our timing will make us much better competitors when we’re firing on all cylinders at some of the bigger crits later in the year. 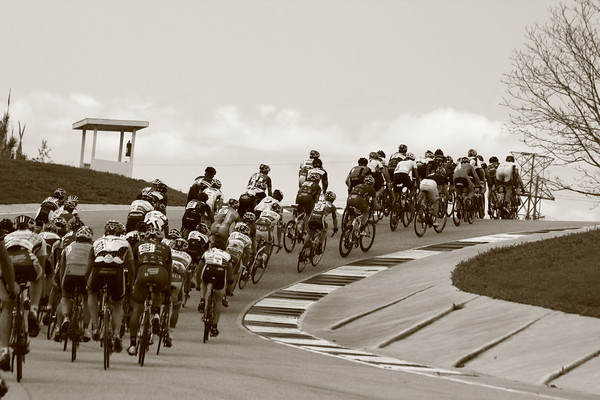 As the lap cards came out and started counting down the final laps of the race, the pace picked up and the position game became increasingly more difficult.  My legs were beginning to feel the burn of some of the previous efforts, and the extra 30 minutes on top of what I was used to doing for a crit didn’t help matters at all.  The back of the peloton was doing everything it could to displace the people at the front of the peloton, and each time up the corkscrew made the burn sink a little deeper into my muscles as I pushed harder and harder to fight off the hoards and hold my position.  But every time there was a lull in the pace of the race, a few more people would find their way around the outside and jump ahead.  I was drifting back through the pack, but I wanted another chance to get the lead-out right, which meant fighting harder and using every opportunity to move back up.  In the end, I wasn’t able to reach John and I hit the corkscrew on the final lap in 20th.  My motivation to move up from 20th was called into question as I was bumped by somebody recklessly passing on the alligator teeth to my right, and then momentum and motivation were officially vanquished when I was caught behind a crash in the last corner with 200 m to go.  Yet, as disappointing as the finish was for me, the way the race played out left me with an excited optimism about the possibilities for this year.

One response to “The Spring Classic at the Driveway”