I like to time trial.  I fancy myself as somewhat of a time trialist, and understandably look for any opportunity to race my time trial bike.  This past weekend was one such opportunity; the Fayetteville Stage Race (FSR) in Fayetteville, Texas.  The FSR consists of three stages over two days.  Day one, for the Cat 2’s, starts in the morning with a 68 mile road race through rolling hills in Bluebonnet country followed by a 9 mile time trial in the afternoon.  The second day consists of a single stage: 95 miles over a slightly different course than the first day.  General classification is based on elapsed time, so the time trial has the potential to make the race, especially in categories that don’t begin with P and end with 1.  Essentially, FSR is a race that is perfectly suited to my strengths.

After a solid week of training that involved crushing the Allsports Timing TT on South Mopac on Tuesday night and having a good race on Thursday at The Driveway, I knew my fitness was right where it needed to be in order to do well.  Add to that, a desire to redeem myself in the eyes of my team after dragging them to Mineral Wells in a downpour in February and then not performing.  To summarize: I wanted to do well in a race that suited me, with fitness that was exactly where it needed to be in order for me to win.  All I needed to do was not make a mistake that would cost me time.  Fantastic.  No pressure, Matti.

As the road race rolled from the line at 10:10 am on Saturday, a nervous electricity ran through the peloton.  Attacks didn’t get chased back as much as they were doomed by too many riders thinking exactly the same thing as soon as the third person tried to bridge.  One person would go up the road and then two.  The third would try to bridge and the tipping point would be reached; everybody would swarm the attackers.  For five laps, this was the nervous little game we played.  Always on edge waiting for the next move, always hoping I was going to get a chance to get away and put time on everybody.  Finally, on the last lap of the race, the Slipstream Junior Development Team decided to keep things together for the field sprint and finally took control of the race.  I relaxed a little and sunk back a few rows and waited.  When the pace started picking up with a few kilometers left to go in the race, I surfed wheels toward the front, taking opportunities to move up as they came.  I was in good position to sprint on the right side of the peloton until a rider unpredictably shot from the centerline to the far right side of the road.  I reacted and stayed upright, but lost most of my momentum.  My sprint was wasted re-accelerating back to race speed as the winner crossed the line.  I sat up and rolled across the line in 12th place, inside the main group and without losing time.

With the road race out of the way, it was time to start agonizing over the afternoon’s time trial, which was less of a big deal.  My time trial routine is pretty well set in stone, and at this point it is simply execution.  I kept reminding everybody around me that it was all about pacing.  “Don’t go out too hard with the tailwind or the headwind will eat your lunch.”  This advice was less for everybody else than it was to remind myself.  Little good it did, because I paid no heed to my own advice.  The first three miles of the course begged to be railed, and I obliged.  By the time I hit the 2nd turn 5 miles in, I was in the hurt locker.  I slowed, made the sharp turn and then accelerated back up to speed, getting back into my tuck as soon as possible.  I spent the next 4 miles concentrating on pushing as hard as possible while ignoring the fire that was building in my quads.  I ended up averaging 28.0 mph over the 9 mile course.  First in the Cat 2 field, and up on GC by 28 seconds.

After the TT was over and the results were posted, a strange calm came over me.  I was one step closer to my goal, yet all the pressure was gone.  With 15 guys within a minute of me on GC, I knew how I was going to spend my Sunday, and knowing is better than not knowing.  Adam and I had a plan for defending the race, and it was no use worrying about all the possible ways we could fail.

We started early on Sunday.  The team woke up and ate breakfast together at 5am.  Oatmeal with raisins and pumpkin seeds.  Orzo and sprouted mung bean omelets with sun-dried tomato pesto.  We berated Jesse for drinking Folgers instant coffee.  It was a relief that the serenity that had fallen over me after the results were posted had not passed in the night.  I was simply enjoying being at a bike race with my boys, and the outcome of the final stage couldn’t change that.  This is what bike racing should be about.

Sunday’s race started the way everybody knew it would.  Robert Biard attacked from the gun with a few other brave riders on the long-shot break-away.  My teammate Adam Allen wasted no time and went with them.  With 95 miles to race, the rest of the pack was content to let them go, and the gap grew to minutes almost immediately until PACC and Thinkfinance, both of which missed the move, sent people to the front to begin the chase.  Eventually, Slipstream contributed a few chasers, but the bulk of the work and organizing was done by PACC.  Thanks to Adam, I had a free ride to sit near the front of the group and watch the chasers rotate, satisfied that the time gap stopped increasing and slowly started coming down.  After close to 60 miles of hard chasing, we caught the small group of escapists and the chase instantly dissolved.  Not to be outdone, Biard went again and Adam just looked at me like “no worries…I got this” and jumped right back on his wheel.  Everybody else just looked around confused.  A break was back up the road and I had a free ride again.  When the break got a minute and a half on the field, a small group of 3 bridged up to join them; there was a moment of doubt that the field would regain the motivation to chase again.

I was wrong.  With approximately an hour left to race, Garmin Development came to the front and, one after another, launched attacks to bridge up to the break.  As long as the big teams weren’t represented in the break, they had an onus to work.  Had Garmin successfully bridged, the dynamics of the race would have changed significantly and it could have been possible for the break would stay away and gain a lot of time.  When nobody else in the peloton showed any interest in chasing, I resigned myself to put my nose into the wind: it was time to work.  This was the scenario my coach had talked about; we knew it was coming and for the last hour of the race, I covered attack after attack from the Garmin riders.  Sometimes one by one, sometimes in twos; they threw everything they could at me, and I suffered because of it.  Bridge and sit, then look back to see where the next attack would come from.  Staying one step ahead was critical to getting a jump on the next attacker before the gap got too large.  With 5 miles to go, Joseph Garcia made a solo bid for the finish and forced the Garmins to react to salvage the possible stage win.  They caught him, barely.  I rode the wave to the finish for my first stage race win. 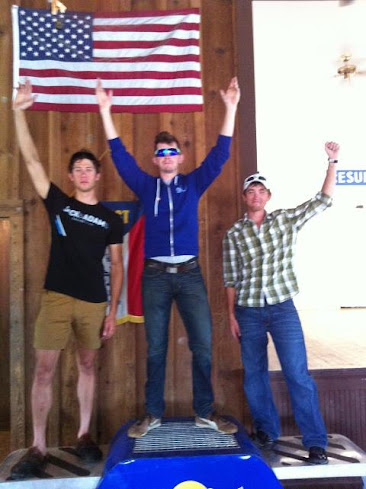