Every downpour begins with a solitary raindrop, and on the 17th of February, that first raindrop hit us just as the sun was setting as we merged into rush-hour traffic on Mopac, headed north to escape Austin on our way to Mineral Wells.  It was like the sun was the only thing keeping the rain at bay, leaving the clouds to do as they wished as soon as the sun was enveloped by the trees on the horizon.  Thick sheets of unrelenting rain; erasing the world outside the reach of the headlights.  It was the kind of rain that induces an anxious, uncertainty induced terror that forces the cautious drivers on the road to slow down to 45 mph in an attempt to stay ahead of the dangers that may be hiding in the curtains of rain.  A white-knuckled four hours after leaving Austin, we were unloading the car at the hotel, praying that the rain couldn’t continue into Saturday.

We were wrong.  The temperature dropped and the rain continued.  The crit was a disaster, and was a great example of how not to prepare for a bike race.  Morgovnik and I made the 10 minute ride from the hotel to the course early enough to pick up numbers, but the cold, rainy weather removed any motivation we had to warm-up once numbers were pinned.  As such, we started the 60 minute race with ice-cold muscles and very little motivation.  It showed, as the pack split almost immediately into several groups.  I’m only guessing at this, but I feel the guys that felt comfortable cornering a technical crit in the rain were the ones that made the initial selection.  Cornering through 3 inches of water is not one of my strong suits, this I know.  I ended up out of contention in one of the trailing groups on the road. 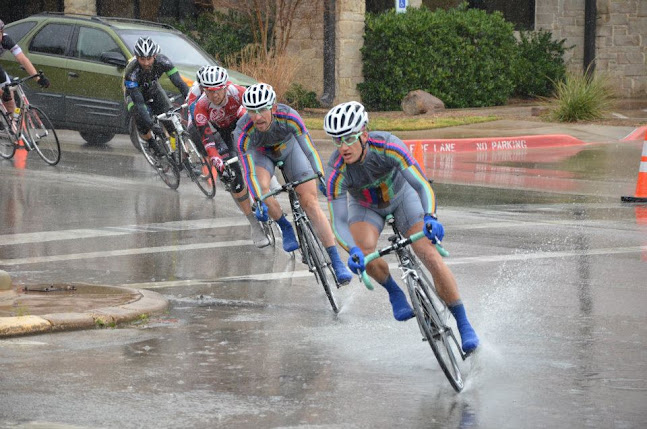 Like the rain, the temperature continued to fall throughout the day.  By the 1 pm start time for the cat 2 time trial, the temperature had dropped to 40 degrees and the wind had picked up significantly.  Despite the cold and wet, I was optimistic that I would redeem my poor showing in the crit.  In fact, the time trail was the part of the weekend I was looking forward to the most, even in the inclement weather.  I got in a short warm-up on my trainer at the City Park and then rode to the start tent a couple miles way.  One minute before my scheduled start, I shed my jacket and gloves; I was ready to race.  As my start time crept closer, I took a few deep breaths and cleared my mind.  15 seconds, the official held my bike upright and I clipped in.  10 seconds, I visualized the calm suffering that was about to take place.  5 seconds, a few more deep breaths…

When the clock hit 1:08, the holder let go of me and I jumped forward from the start house; not quite a sprint, but not a sustainable pace either.  I got up to speed quickly and then tucked into the position I would stay in for the next 20 minutes.  The course was hilly, but the pitches were never bad enough to need to come off the aero bars or shift out of the big ring.  As my legs began to burn during the first major climb, I just counted my pedal strokes to keep a rhythm: 1-2-3-4.  1-2-3-4.  The slower pace of the climbs were a welcome respite from the sharp, stinging pain of being blasted on every square inch of exposed skin; the 43 mph descents turned the soft raindrops into searing needles.  Even if I didn’t question my decision to ride without arm warmers, I certainly wished I had my sunglasses on.  Cresting the 2nd major hill of the course, I felt my spirits sink as the finish-line was nowhere to be seen.  The long descent followed by another climb lay stretched out ahead of me.  There was no visual cue to lock in on for the last few kilometers, but I was familiar with the course profile and knew the finish-line couldn’t be much further than the last climb.  I stuck to my plan and rode the last climb as hard as I could; I wanted nothing left in the tank when I crossed the finish line.  Mission accomplished.  Had I tried to stand up to sprint at the end of the race, I would have fallen off my bike.  Thankfully, a couple of guys from DNA Racing out of Oklahoma offered me a ride when they saw me make the turnaround to head home, wearing nothing but a skinsuit.

Soggy and cold, we were finally done for the day.  Time to relax and recover for the road race on Sunday morning.

There isn’t much to say about the road race.  I raced aggressively in order to take pressure off Adam Gaubert, who was sitting at 3rd overall in GC.  Our goal was to put somebody into the major break-away of the day so we could put ourselves in a good position at the end of the race to counter-attack if the break got caught.  Leading into the 3rd lap, Michael Sheehan and I bridged up to a 3-man break-away that had been up the road.  The five of us worked well to stay away.  We almost made it, too.  With approximately 2 miles to go, Gaubert rode the wheel of another rider across the gap to us and that caused the pack to start chasing.  The break dug as hard as it could to stay away, but it wasn’t enough.  In the end, we were caught and Gaubert’s courageous move fell short.  I suppose that’s the nature of a sport where there can be only one winner.

With the exception of the crit, I’m pleased with the way I raced over the weekend.  The time trial shows that, while I still don’t have any top end, the engine is still there and is strong.